Even though I knew he was playing games, I couldn’t resist him. He was under my skin, in my blood, and deep in my bones.

My life was a lie and I had no idea. He forced me to see the truth. Although it hurt, he healed me.

Because of him, I was strong enough to survive.

Without another word to me, he picked up the handset again and clicked it. “Jack, after you take out the trash, there’re two women at table fifteen. Tell them that King will be taking Jena home and that their tab is on the house.”

King’s eyes never left my face during this exchange. When he was done, he dropped the radio on the desk again.

“Now, you’re girls are taken care of and you and I need to have a chat.”

I straightened my shoulders. “Like I said, King, I appreciate your help but I’m leaving.”

Suddenly he was right in front of me, no, practically on top of me, his left arm wrapping around me and pulling me tightly against his body. His right hand twisted in my hair, yanking my head back so hard it almost hurt.

I didn’t understand why, but I felt that tugging somewhere else on my body. Somewhere much lower.

“Don’t say it unless you mean it, darlin’,” he snarled.

Then he kissed me.

All Or Nothing is book 1 in the new Wicked Games series by C.C. Wood

All or Nothing contains some of my favorite aspects in any novel. 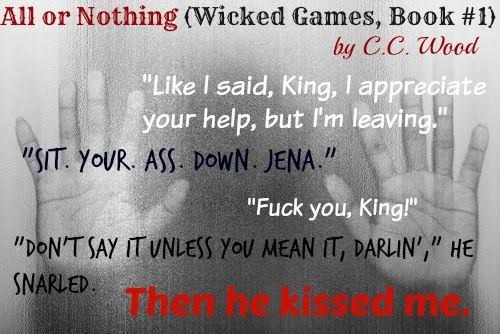 A no nonsense, independent, headstrong heroine that I think everyone can connect with… 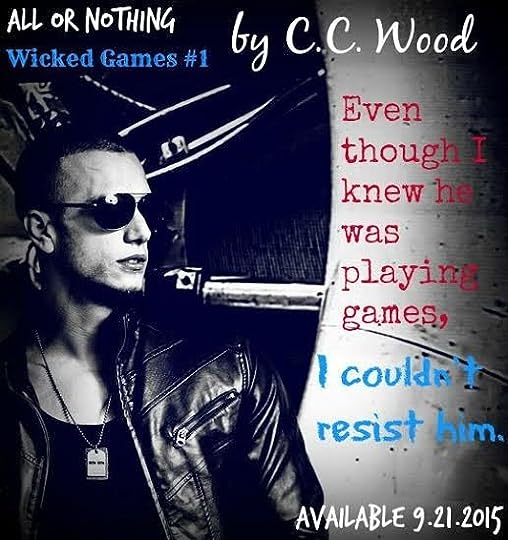 Let me just jump right into the fact that I LOVE the men in this novel. Each Alpha introduced is better than the last. You won’t be able to help but fall in instant lust with them.

What I love about CC Wood’s writing style is that it’s full of character, story, and twists. She doesn’t pad her novel’s with “fluff” to hit word count. Which saves us from any dull moments or stale reading time, hoping that the books picks up again.No matter what she writes I know that each book to come is sure to be better than the last.

I CAN’T WAIT for the next Wicked Games!

CC Wood is a native Texan that grew up either reading or playing the piano. Years later, she’s still not grown up and doing the same things. Since the voices in her head never shut up, C.C. decided to share their crazy stories and started writing books.

Now that she has a baby girl at home, C.C.’s non-writing time is usually spent cleaning up poopy diapers or feeding the poop machine. Sometimes she teaches piano, cooks, or spends time bugging her hubby and two beagles. Follow CC on Facebook and Goodreads. She also has a website that offers special content and updates.