I’m so excited to be sharing not only an author interview with author Amy Jarecki but one awesome giveaway!!! If you’re unfamiliar with Amy Jarecki you are in for a treat!! Her next release ‘The Highland Chieftain’ just made my heart melt and skyrocketed Dunn MacRae to one of my top book boyfriends!

What makes a book a “beach read” for you?

It has to be good! Books with interesting characters, a splash of humor, and well-developed plots will grab me every time.

I have a pool in my backyard. Love fun in the sun without sand in my pants!

How many stories do you work on at the same time?

Usually no more than two. I prefer one, but often I’m editing one while drafting another.

What summer drink would you pair with the heroine or hero from your book?

In The Highland Chieftain , Dunn and Mairi enjoy wine. I think they might have loved a crisp Riesling.

What character from your latest release would you want to hang out with this summer?

Definitely Dunn MacRae. There is nothing more romantic than a Scottish Highlander who carries a sword at his hip. He might be a bit rough around the edges and a total alpha male, but his intensity is what makes him sexy. Who wouldn’t fall in love with rugged warrior, who only has eyes for you, would protect you with his life, and speaks with a deep, lilting Scottish burr? *swoons*

A Summer Memory with my Dad:

When I was a kid we drove to Montana every summer to spend a couple weeks at my aunt’s lakeside cabin. I’m an early riser and love to fish, but I could never take a fish off the hook because they were too slimy. One morning when I was about nine I woke particularly early and headed down to the dock with my pole. If you’re an angler, you know that sunrise is the ideal time and fish are biting like maniacs. In five minutes I had a ten-pound trout on the line and battled to reel him in, while screaming, “Dad! Dad! Dad!”

My father flew out of the cabin wearing only white boxers, barely touching the ground as he ran, blindly shoving his glasses on his face. When he reached the dock he gaped at me with the most baffled expression, his glasses cockeyed. “What happened?” he demanded, looking rather angry, “I thought you were drowning.”

When I held up the fish and asked him to take it off the hook, I think it took a great deal of restraint not to push me into the lake.

I do love getting to know a bit more about authors! Be sure to give Amy our thanks below! Here’s a short bio about Amy and how you can stay in touch with her. Keep reading to enter for your chance to win FIVE Paperbacks & tote from Forever Romance’s #ForeverSummerReading PLUS info on her next release and a sneak peek at one of Amy’s favorite scenes from The Highland Chieftan!

Award-winning and Amazon All-Star author, Amy Jarecki likes to grab life, latch on, and reach for the stars. Reinventing herself a number of times, Amy sang and danced with the Follies, was a ballet dancer, a plant manager, and an accountant for Arnott’s Biscuits in Australia. She’s married to a mountain-biking pharmacist and has put four kids through college. Learn more about Amy and her books at amyjarecki.com 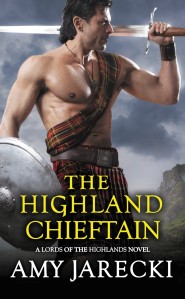 “Readers craving history entwined with their romance (à la Outlander) will find everything they desire in Jarecki’s latest. Scottish romance fans rejoice.” -RT Book Reviews on The Highland Commander
He is the last man she would ever marry…
After being unceremoniously jilted by her betrothed, Lady Mairi MacKenzie is humiliated and heartbroken – but she’s not desperate. As the daughter of an earl, she won’t give her hand to just anyone, and she definitely isn’t swayed by a last-minute proposal from Laird Duncan MacRae. The powerful clan chieftain may be disarmingly handsome and charming, but he’s not a nobleman. Mairi doesn’t want his pity or his charity – even though his dark smoldering gaze makes her melt with desire.
She is the only woman he could ever love…
Dunn may be a battle-hardened clansman, but he’s always had a soft spot for Mairi. For years, she tormented him with flirtation – only to reject him. But he’s not giving up. When Mairi is attacked by redcoats, Dunn goes after the woman he loves. Through brute strength and fierce action, he will protect her life at any cost. But to win her heart, he will have to show her the tenderness in his own.
Lords of the Highlands series:
The Highland Duke
The Highland Commander
The Highland Guardian
The Highland Chieftain
Click here for a sneak peek at one of Amy’s favorite scenes from The Highland Chieftain. You can check out my five-star review for The Highland Cheiftan HERE