Title: Be The One

Jett Vaughn has one thing on his mind these days – Presley Hart.  He will do anything it takes to make her his.  At least, he thinks he will.
Presley Hart wants one thing in life – a man who will make her his number one.  After being married to a man who never put her first, she swore she’d never settle for second best again.  At least, she thought she wouldn’t.
When Jett’s life comes crashing down around him, his flaws are laid bare for all to see.  Presley stands by her man but there’s only so much she can do to help him.  She loves him and wants to be with him but she has her limits and Jett’s about to reach them.
In the midst of hurt, loss and destruction, can love win out?  Can a man who is struggling to find his way, show the woman he loves just how much he wants her to be the one?  Or is there only so much a heart can take before enough’s enough?

I squeeze him and then drop to my knees to take him into my mouth. After I treat him to my mouth and tongue for a moment, I let him go and take him back into my hand. Looking up at him, I suggest, “That might be something I would let you boss me around on.”
His hands grab me under my arms and pull me up. He lifts me and turns around to deposit me on the vanity. After I’ve wrapped my legs around him, he kisses me hard and growls, “I did consider bossing you into sucking my dick for longer but it turns out I want inside of your pussy more than your mouth.”
“Turns out I want that, too. You gonna take care of that or are you all talk and no action?”
His eyes flash heat at me and he hisses. Running his finger over my lips, he says, “I’ve fucking missed this dirty mouth. I’m not sure what I like more – the words coming out of it or the way it fits perfectly around my cock.”
I dig my fingernails into his back and pull him closer. “I tell you what, you hurry up and get that cock of yours inside me and I’ll treat you to both words and tongue all day long.”
“Jesus fucking Christ, woman, I’m going to bang you so fucking hard you might not be able to speak for the rest of the day.” He positions his cock at my entrance and I try to push myself even further against him so I can force it in, but he’s teasing me and pulls away at the last moment.
“I’m game if you are,” I practically beg him. “Let’s see what you’ve got, Mr. Rockstar.”
His hungry eyes are all over me and it’s like a switch is flipped and he can’t hold back any longer. He thrusts in and my eyes roll back in my head. He wasn’t kidding when he said he was going to fuck me hard. Hard is what I just got. And I’m in fucking heaven.

ALL YOUR REASONS (CRAVE #1) BY NINA LEVINE

FREE FOR A STRICTLY LIMITED TIME 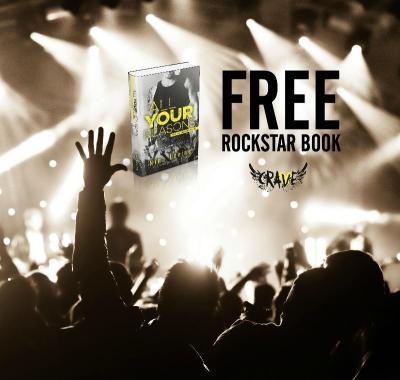 When heartbreaker meets ball breaker, sparks will fly.
Rockstar, Jett Vaughn, isn’t against settling down, but no woman has ever held his attention long enough for a relationship to develop. That is until he meets Presley Hart. She’s confident, opinionated and headstrong. She drives him to the edge of crazy, but he can’t deny how she makes him feel.
He wants her heart, but she only wants his body.
Presley’s not against giving her heart to a man, but she has too many reasons why he’s not the one to give it to. Jett isn’t a man who will take no for an answer though. He’s about to declare war on her reasons and take what he wants. 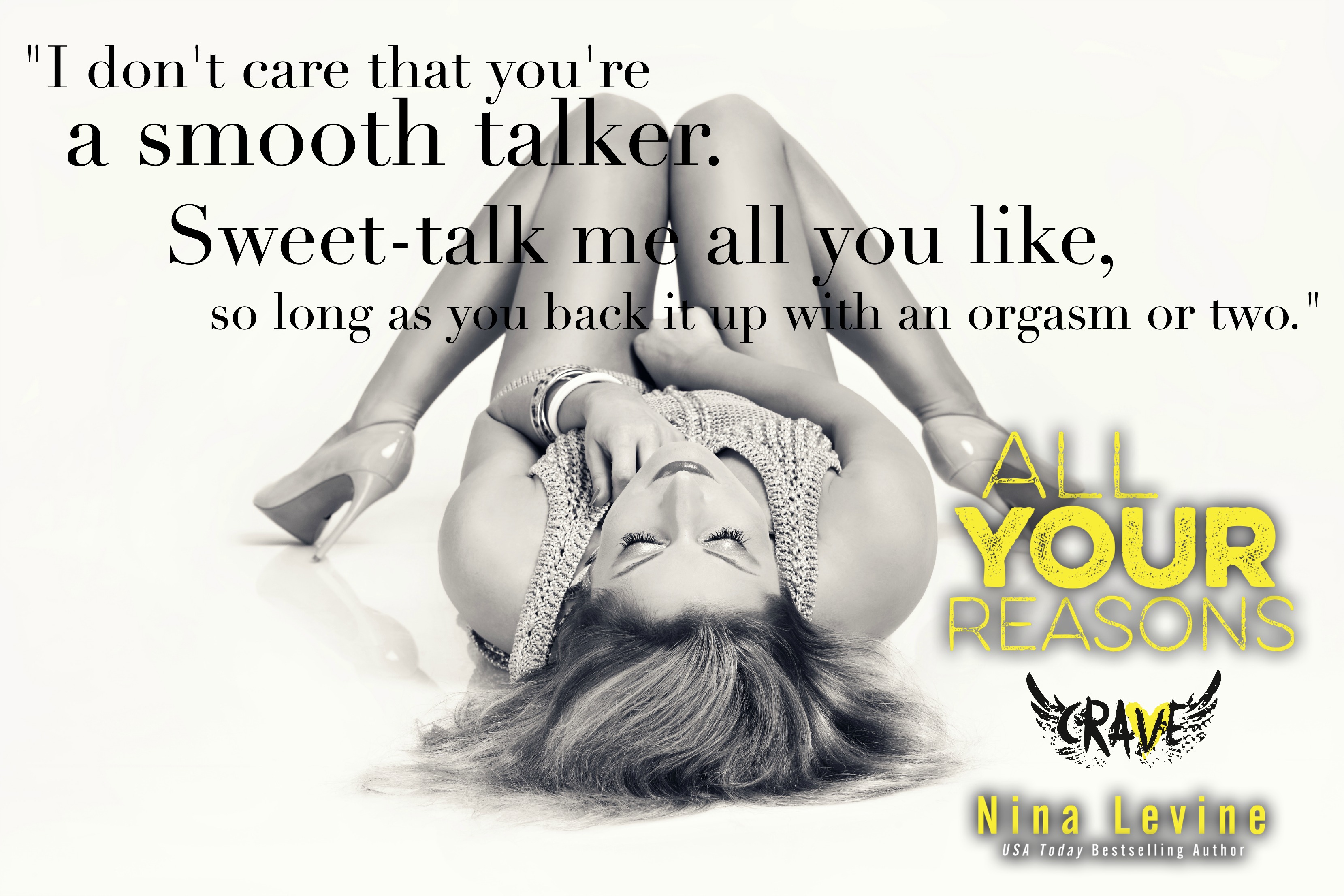 USA Today Bestselling Author Nina Levine, is an Aussie author who writes stories about alpha men and the strong, independent women they love.
When she isn’t creating with words, she loves to create with paint and paper. Often though, she can be found curled up with a good book and some chocolate.
I love to chat with the readers of my book so please visit me or contact me here:
FACEBOOK | TWITTER | GOODREADS | AMAZON | NEWSLETTER
*****************************

Title: THE EMANCIPATION OF LOVE (Monster, #2)

I am a monster. A sexual deviant. A gorger for pain. I am Worthless William Welch.

But I am hers…

Ten years since Welch has seen Gwendolyn he finds himself in Portland, the same city they were supposed to live together; just two bloody lovers against the ghastly ways of the world. But that isn’t how their story would pan out and Welch troubles himself everyday with memoirs of the only one that will have his heart.

His sweet, sweet girl. Fiery Gwendolyn is gone and he is alone with nothing to occupy him except memories.

As he tries to grasp onto the recollections while simultaneously forgetting the pain he was bathed in for so long, he searches for a woman that will give him the agony he so desperately craves. You know what they say… be careful what you wish for.

As Welch pushes an unlikely woman to the brink, he is surprised at her eagerness as she gives him what he longs for. Punishment, pain, and pleasure. He becomes enveloped by the demons of his past, the torment of his current, and the ghost in his mind that he refuses to part from.

Reverted back to the dysfunctional little boy who obeys, Welch finds himself in a disastrous cycle while the edge of goodness is within reach. Will it be too late for him to find love before he breaks himself down to a point of no return?

**Graphic content warning including sexual degradation, emotional abuse, adult situations, and unconventional sexual practices that are intended for mature audiences only. Not suitable for readers under the age of eighteen. Reader discretion is highly advised.***

Gwendolyn vs. the Band of Barren Hearts (Monster, #1)

Monsters. They don’t hide in your nightmares. They steal you away from the good life and prevent you from living your dreams.

That’s where 17-year-old Gwendolyn Fitzpatrick found herself; surrounded by wicked fiends after everything she thought she had was gone in the blink of an eye. She was shuffled away with one bag of memories miles away to a pair of foster parents that hardly had her best interests at hand. Forced to obey and listen to her caregiver’s commands, Gwendolyn buries her old self and focuses on the pain to become one of them.

A monster herself to seek vengeance.

While yearning for her teeming point to come, Gwendolyn starts to connect with another 17-year-old foster boy living with her who calls himself Welch. Just when Gwendolyn starts to feel faith splice its way through the venom of pain, the connection she has with Welch is put in jeopardy as the harshness gets worse with each passing day.

Will the two tattered spirits make it out alive?

Mary E. Palmerin is 27 years old and resides in Indiana. She is married, has two small boys and usually has her nose in a good book when she isn’t writing. She has been writing since she was a young girl, scribbling fairy tales down on notebook paper, creating poetry through her teen years, and many shorts in between, all of which she has kept. Mary enjoys telling tales that are both raw and real, seeing it as a gift to be able to evoke various emotions from her readers.

She enjoys spending time with her family and friends, traveling, anything outdoors, relaxing by the pool with a good piece of literature, red wine, coffee, tattoos, and HEA!